I watched this movie for the first time when I was a kid - and I had got a real bee in my bonnet because I remember had drown a lot of Starship Troopers along with Clonetroopers and Stormtroopers back in the days -, then yesterday I watched it once again for the first time and now I get to know why I loved it so much, I'll tell you in a couple of brief points. Also I will tell you why in my opinion it didn't get as big and famous as Star Wars.
So what's good about this film? Let's find out:

- The presence of an epic main theme (Klendathu's Drop), which to me is foundamental in every movie ( infact the 40% of my love for Star Wars comes from the amazing scores by J. Williams ). This theme describes perfectly the landing, giving you feelings of epicness, bravery, anxiety all togheter. The pressing rythm of drums gives you the idea of a military march, a huge army mobilizing, while the wind instruments give it the right taste of drama. The dramatic force of this score is unique and make this a real masterpiece capable to sustain and pull up the entire movie.
https://www.youtube.com/watch?v=CIGHCoVzqtk

- The awesome designs of the Starship Troopers' costumes, of the ships, of the bugs and almost everything (they took a lot of inspiration from Star Wars and Star Trek in my opinion). 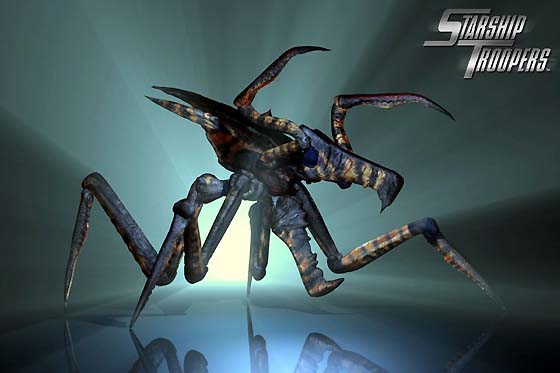 - The idea of fanta-fascism, a world dominated by propaganda and lies (which is sorta a Verhoeven's watermark), the overconfidence of the human race and the cringy and dumb aura of the people during the federal network sequences, the amusing haughtiness of the federal network itself and the constant and desperate need of cannon fodders (look at the end of the movie when the recruit very young people like the Nazi Germany during WW2) are both entertaining and filled of cues to think about many different things. We can speculate for hours about Starship Troopers stand for the acronym SS troopers. The idea of nazi uniforms for high ranking officers? Just superb.

- Every death is unique, disgusting and freaking awesome. Sometime it's not necessary at all (just like the scene where the turret gunners got burned alive, which doesn't make sense because in the previous scene all the troopers went on full back, so why the heck they were still there? Well, probably it's the plot-effect :rofl:) 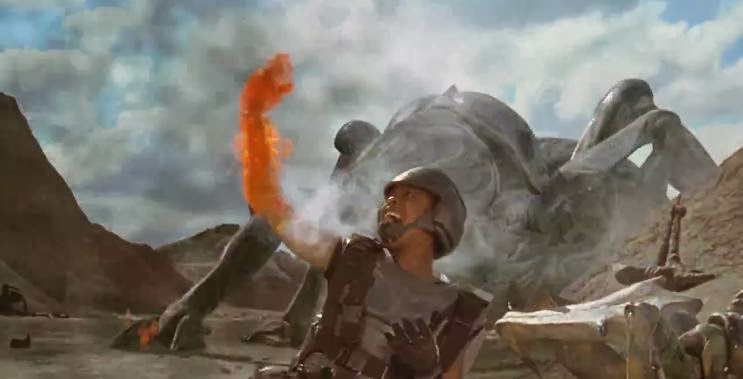 - Although the characters don't shine you feel something when Dizzy dies (even though this may be also a flaw as I will mention soon), which means that the relationships are at least decent.

- The final scene is simply clever and open to interpretations. "They'll keep fighting! And they'll won!". The narration of the war is suspended so that we have the idea that war never ends up ("they'll KEEP fighting" forever).

- Even if the bugs are disgusting they may be not the bad guys: they do not torture prisoners like humans do and for the most they are just fighting a war against an invader. There is no evidence that the meteor was shot by the Arachnids indeed ( their technology pretty sucks compared to the human one). This gives you hints of the fact that war is simply aggression and business. Everything foreshadows that Terran elites are interested in a constant state of war, spreading ideas of violence and brute predominance even in schools. This way they keep a machine wich grinds human flesh but produces lots of incomes (think only how much it could be expensive an interstellar starship or the training equipment used by the recruit troopers).
- Human are disorganized, overconfident and poorly equipped and trained for the situation they are sent to: they were trained to fight other soldiers, but are totally unaware of "bug warfare" as we see soon after the landing scene. This results in a crushing defeat that not only effects the troopers but the entire tone of the movie (it's like a Vietnam in space). On the other hand bugs not only are well organized in an efficient class-system (alien infantry, alien aircraft, alien armoured cavalry) but they prove also to be intelligent: yes, the average bug is "selfless" and savage, but the brain bug leading the Arachnids even plans to get informations to know the enemy (that's the same thing humans try to do), showing how clever bugs can be, while in the first part of the movie we are told how stupid and weak the bugs are. The Battle of Klendathu is a revelation not only for the Terran Federation but also for you watching the movie since everything you've got to know in the first part of the film is wiped out by that first bloody encounter with the enemy and totally reversed in the end. 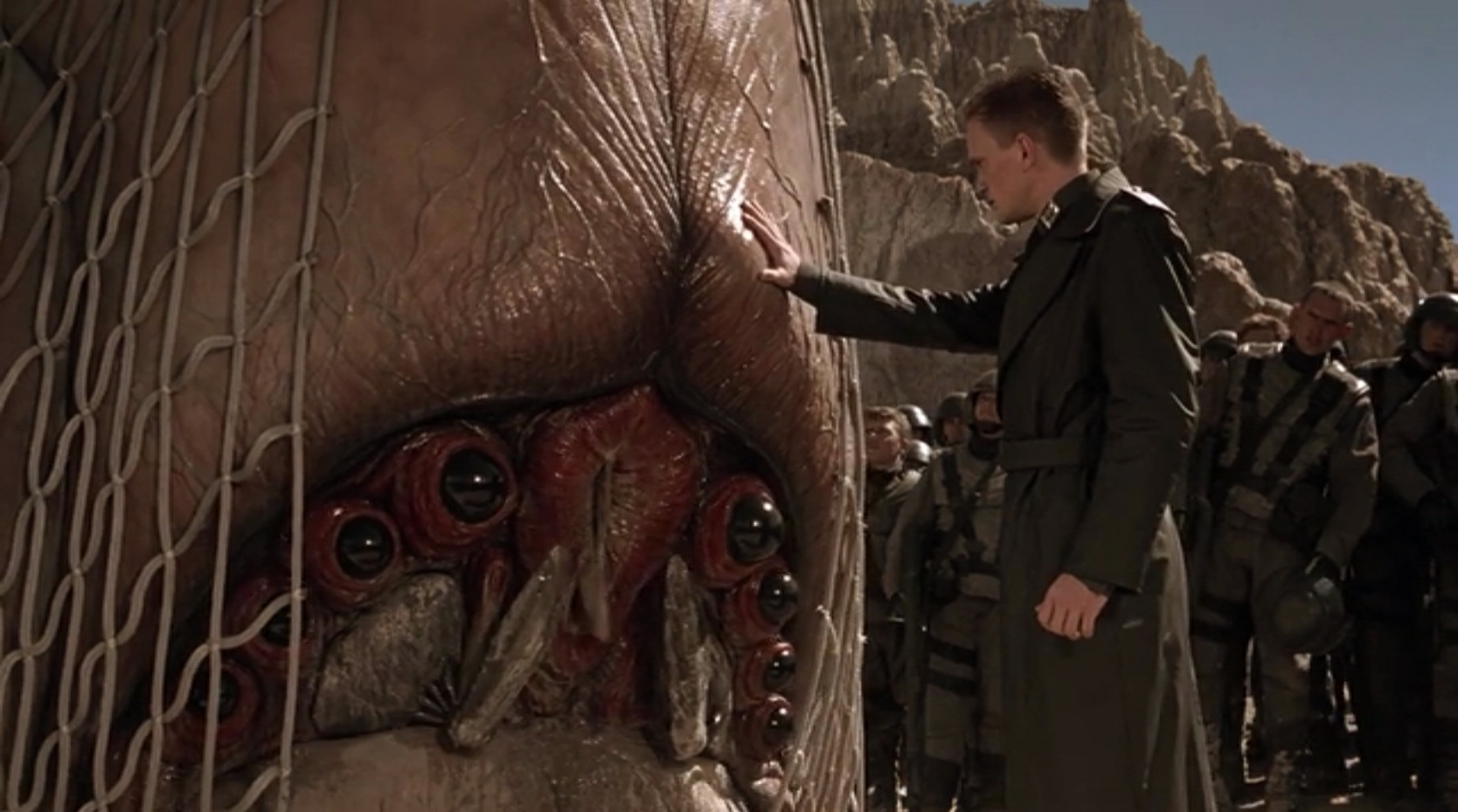 - During the movie the protagonist evolves from a young and unexperienced boy driven by emotions to a though killing machine, exactly like the rest of the Terran Federation Army. Also he becames just like his teacher, yelling the same sentences like if he's reading a script and surprisingly with the same voice tone, introducing the audience to the horryfing fact that war repeats itself over and over again.

I showed you the good things, but there are a lot of flaws we can mention:
- The characters are flat, stereotyped and badly played by the most of the actors. Even though the protagonist evolves so doesn't his overall acting performance. His squared chin is a sort of metaphore of his interpretation: perfectly solid, shaped but in the end flat and boring. I'm not saying Casper is a bad actor, but we see almost no emotional conflict in him throughout the movie, except for some spare scenes (like the Dizzy's death or the argument with Carmen).

Richards is an absolute boner (her lips are the dream of any man from my generation) but she's also a really bad actress. Except from some sparkles of emotion she is totally unable to capture the screen, no conflict or drama whatsoever in her character, no evolution, no charisma. Compared for example to Fisher's Leia or even Portman's Padme she counts to nothing. The Princess Leia portrayed by Fisher is deep, intelligent, heroic, iconic from the first scenes of Star Wars even though she is not so beautiful in her look.

Padme is at least believable. Carmen is just the plastic boner you will gaze for hours but soon forget. She is supposed to be smart, charming, sensitive, badass (she is really good at math and she is an exceptional pilot), but she is just a pretty looking girl that doesn't fit a thing with what she does in the movie. Also she desperately needs someone, she is almost selfless and constantly act like a puppet that can't make a move without an external hand. Dizzy on the other hand looks smarter and more badass then she is supposed to be, but at least she is an interesting character.

Rico's friends have no distincive traits. What we know about the blonde guy? He is a big dummy who likes to play the violin, that's it. Even the teacher seems flattened to a stereotype since he has not enough screen time: maybe I wanted less splatter and more teacher talking. Overall he seems an interesting character but is never really explored and we don't care much when Rico has to shoot him down. Imagine simply a dialogue with Rico about his past, about why he became that way, even "you remember me when I was young", and then immagine him describing how he lost his arm or getting to know Rico better. Why does he upgrade Rico so fast? Why does he trust him so much? It's simply because he fights better than the others?

That's not enough. I wanted more of the characters and I wanted sequels to explore their personalities, to develop them and to see new planets to expand an universe that seems so awesome on the paper but is totally flat on the screen. 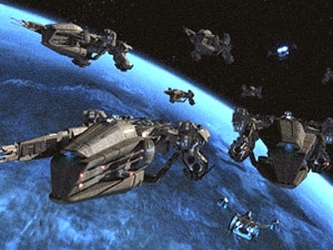 - Scores are great but are used in the worst way possible. Except for Klendathu's drop scene score isn't much there, while in movies like Star Wars music describes and accompanies every scene giving you all the feeling out of each moment. What is the Death Star Trench Run without those french horns beating that pressing rythm? What is Vader without the Imperial March?
https://www.youtube.com/watch?v=aHQrcyerVQQ
The power of a score in a sci-fi movie can't be neglected or you will end up like Starship Troopers: two or three memorable scenes (mostly because of music) and a lot of well-thought and well-written scenes killed by the lack of music in the background.

- No good sequels or prequels. This condamned this movie to be forever forgotten by the pop-culture. Maybe it's just because the characters weren't memorable. Imagine guys like Han Solo and Luke like protagonists, charismatic characters which make the plot compelling to the audience. Too much propaganda and bug splatter killed the movie like too much CGI and politics killed the prequel trilogy (or like the fan-service killed The Force Awakens). Also nobody commercialized the thing enough like Lucas did with Star Wars: no toys, no costumes, no videogames. This way the movie died right after the year of release to be resurrected as a stinky brainless zombie in 2003 and 2008 "sequels".

- Swinging pace throughout the film, going from really slow sequences to really fast-paced and confused scenes. Think about Star Wars: every moment has its perfectly balanced weight and importance, also because of every music theme you listen in the background. Every scene is memorable and takes the right time: not too slow, not too fast. Think about how compelling and breathtaking are the Trench Run scene, Han Solo shooting down Stormtroopers, Leia and Luke crossing the pitfall or how much good strain and simple charm has the Vader vs Obi-wan scene. This isn't true for Starship Troopers: I watched it yesterday and I remeber very few scenes compared to how much the movie is long (almost two hours). Not because what I don't remember was bad (except Carmen and our dear wanker officer's romance scenes, those were really really bad), but simply because it was or too short or way too stretched out.

Those are my humble thoughts about this movie. What about you? What do you think? Why didn't this become famous as Star Wars in your opinion? "Come on, apes! Do you wanna avoid to reply forever?"