The second of the new maps to be appearing in Last Days is inspired mostly by Eggman's "Aldura Campaign" Map series. Aldura: Coastline is set on a clifftop CIS base guarding a small Alduran continent, their final stronghold on the planet. Gameplay wise it's a fairly mixed map, with open pathways, heath/rock areas and underground tunnels to fight through.

This map also features the first LD campaign (more on that later) mission, Aldura - Spearhead, set at the end of the long and bloody campaign Eggman's map series featured. The seperatists last stronghold on Aldura is heavily defended from troop deployment and air attack via powerful anti-aircraft defences along the coastline. Republic troops attempt to destroy a clifftop base to punch through the Seps last line of defence...

Modes are campaign and conquest.

Sounds cool, looks even better.
I always liked Eggman's Aldura maps, and this one looks like a nice final to them.

I look forward to seeing what you've done with the campaign/story.
Top 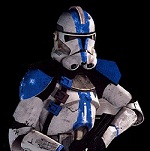 Another great looking map Sky. I like the way the color of the environment is reflected in the buildings. Very natural looking

400x better than my coastline based map

Is that first picture from the campaign or is there a CP there? It looks pretty cool, the clone troopers coming out of the gunship and all that. Nice map, Sky!

@Sky: Looks like the clone trooper's skins are taken from the TOR trailer "Hope"
Sweet.

@Nihilo: Yep, campaign section includes landing on a beach and scaling the cliffs below the main conquest area.

@Spiderpig: they're made by AQT's, guess he might have been inspired by that triailer. Think I just asked for some legion skins using red as the main colour.
Top

Sexy.
Anyway, ENB Series will do wonders for this map hehe. This looks amazing. Looks like a professional, stock map, and I can't say that about most maps. Good job.
Top

Eaol wrote:Sexy.
Anyway, ENB Series will do wonders for this map hehe. This looks amazing. Looks like a professional, stock map, and I can't say that about most maps. Good job.

I am not agree , it is far better than stock maps

Minor updates to this map:

- Cut out the underground base section because of graphical limits. It'll probably make a reappearance somewhere else (was mainly made of modular tunnels glued together in XSI anyway, so easy to reuse). Base has been replaced by a mountain path.
- Probably won't have random skies - tried a couple and they didn't really work out well. Might just have rain on/off.

that's great. is it possible to hide complete with stealth function??
Top

Anakin wrote:that's great. is it possible to hide complete with stealth function??

Only if you are stationary. If you walk, you will become partially transparent, if you run, you might as well turn off the cloaking device, because you will be completely visible.

This looks really nice, it all fits together. I like how you made the mountains.
Some more texture/color viarity wouldn't hurt.
Top
Topic locked
32 posts • Page 1 of 2 • 1, 2