It's about time I post up what I've been working on for the past couple of months.
I created a map called Utapau Attack back when this game first came out and released a few versions here and there but they were riddled with bugs and I never released a nicely polished or final version. I made an attempt back in 2011 but things unfortunately didn't pan out.
So here we are, roughly 10 years later since the release of 1.75 to be succeeded by 2.0

I had to start from scratch and relearn quite abit of the system and tools, but slowly things started to come back to me.

While keeping some of the original layout from the previous version, I've made many improvements to the map pertaining to the side which the CIS team spawns from. The portion of the map layout from which the republic team spawns has remained the same.

UTAT Removed due to too many AI issues and collision 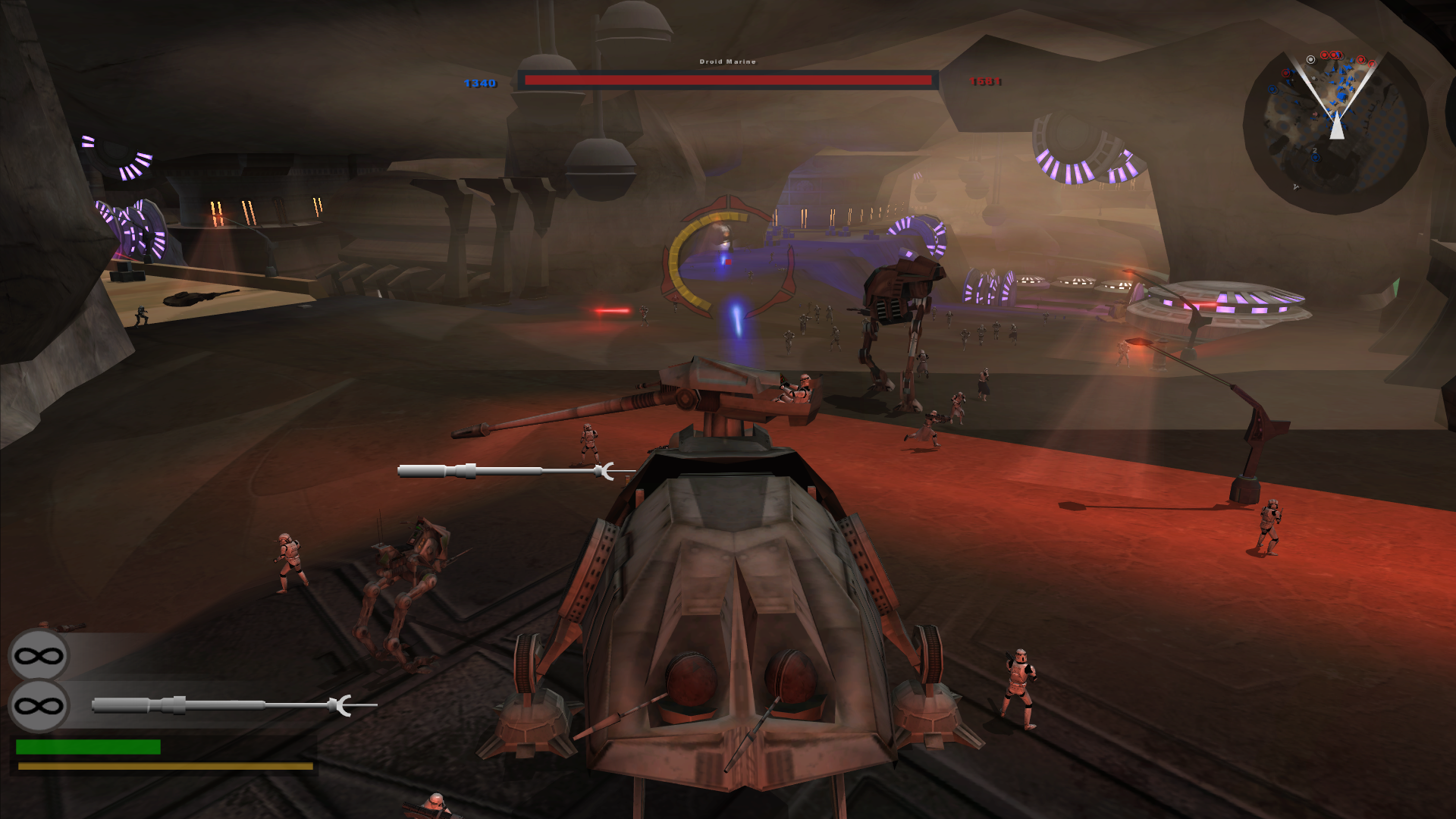 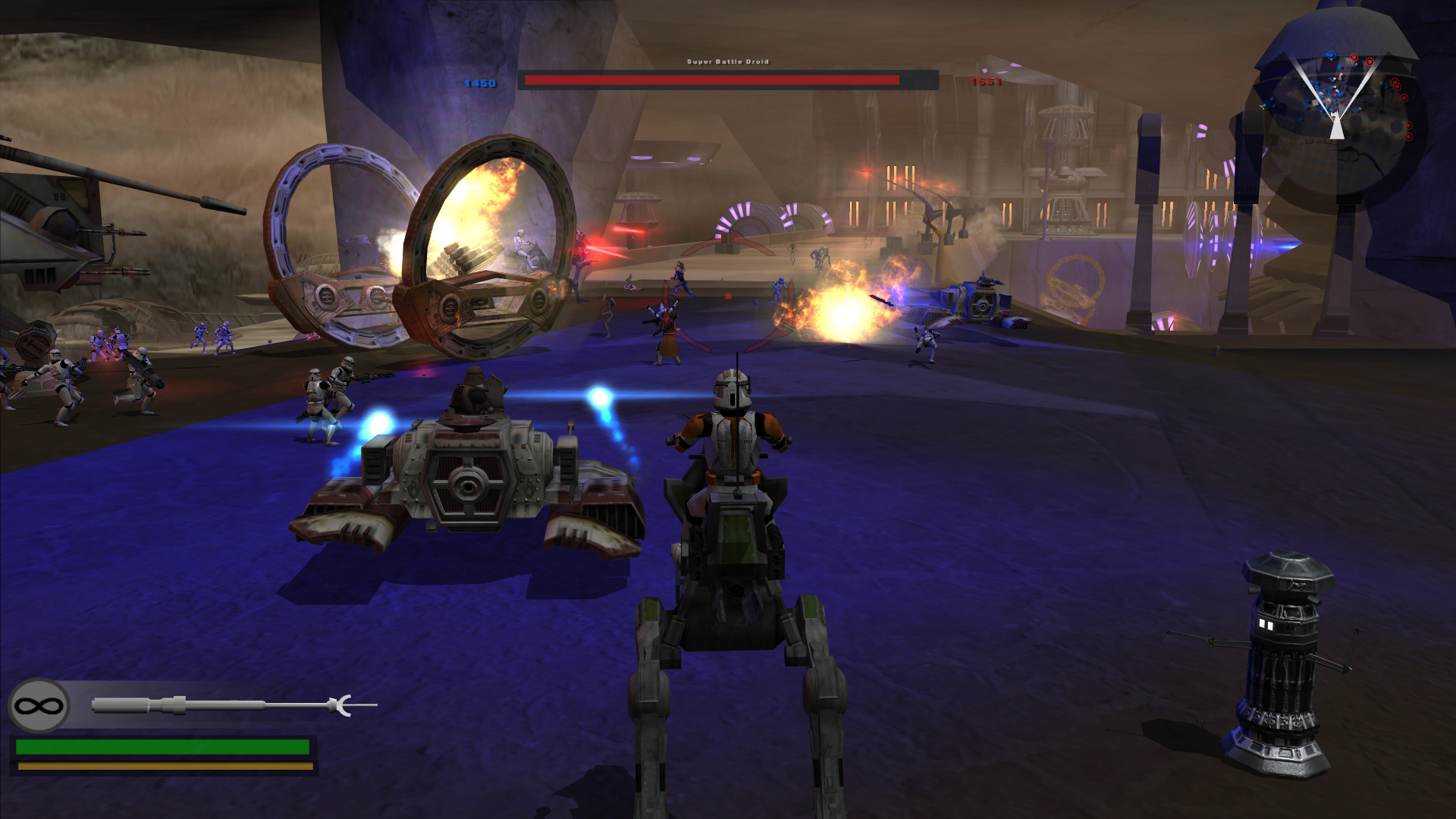 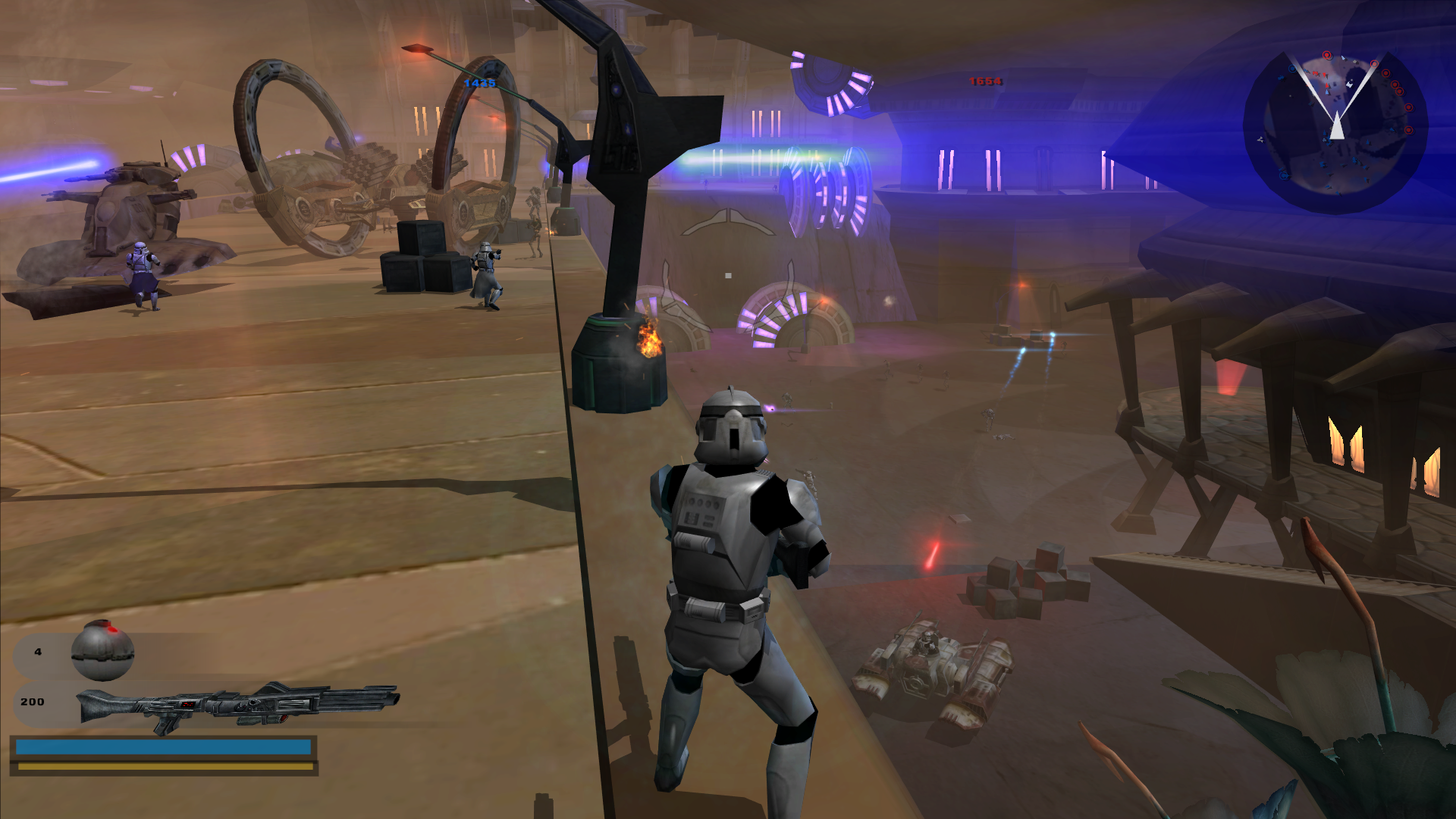 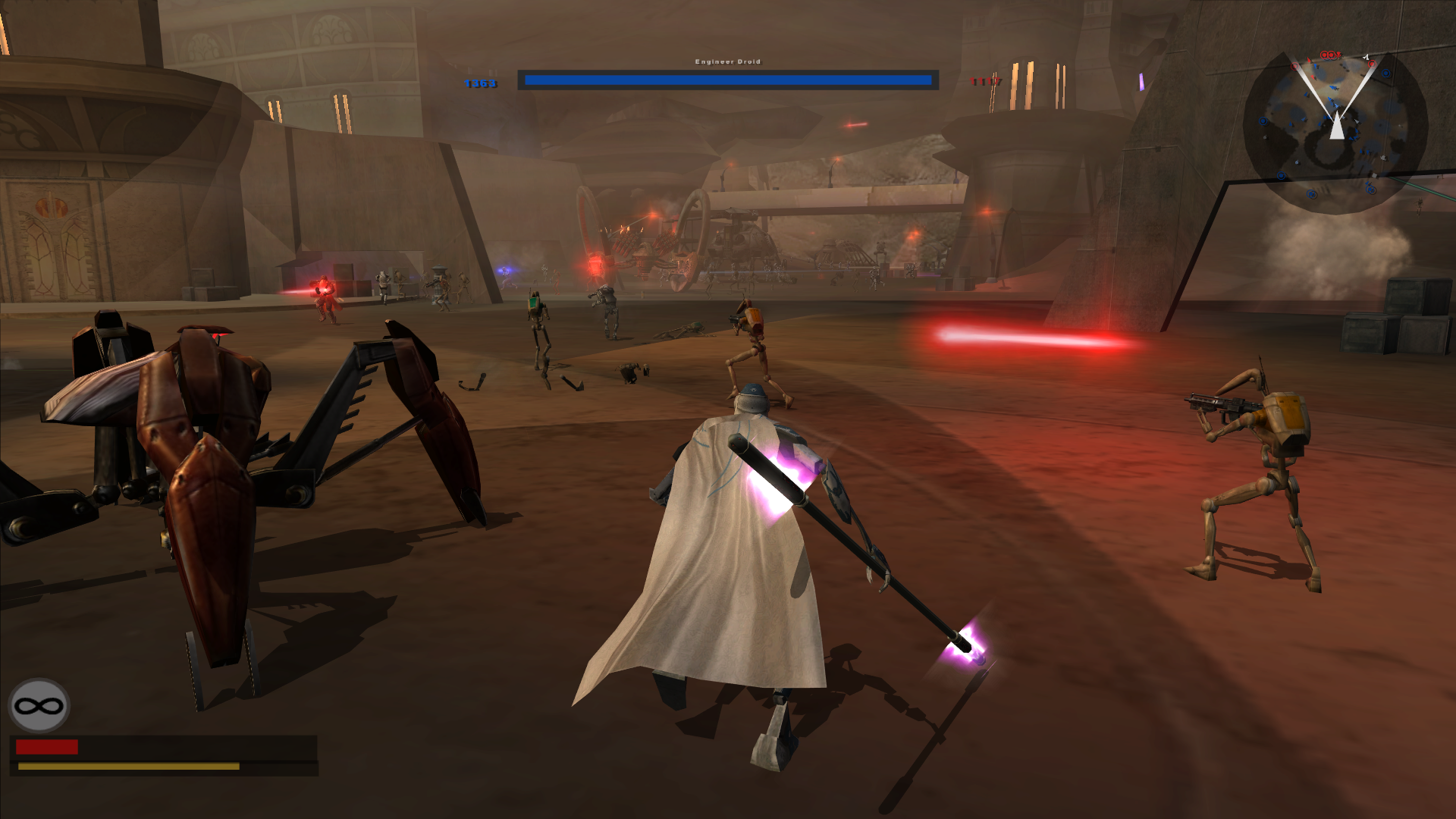 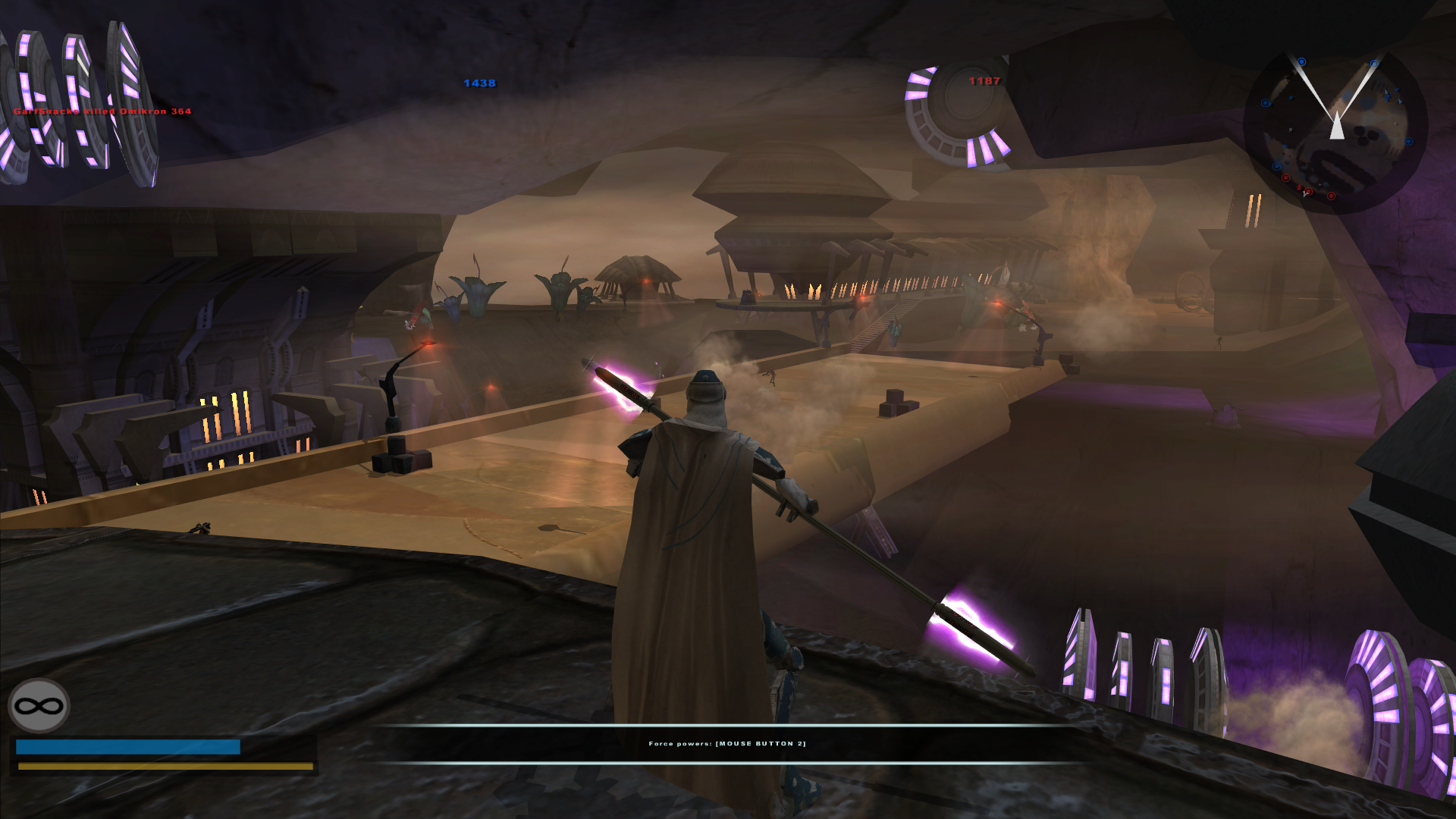 Ooo, very nice! I really dig the atmosphere and lighting!

Let me know if you need any help doing these things. Also, if you can provide an asset requisition list of needed ambient sounds (basically just descriptions of the different ambient emitters and environmental sounds), I can create and provide the sounds (at least for staff and ambient sounds).

Oh, and would you mind sticking those large images into hide tags pretty please?

This is a cool mod where do I download
Top

Huscarl wrote:This is a cool mod where do I download

Now I assume you mean you can help provide the wav files or do you mean putting together the munged sound file? 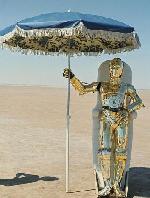 GarfSnacks wrote:Now I assume you mean you can help provide the wav files or do you mean putting together the munged sound file?

This is definitely a large scale map for sure, quite possibly too large as I have already hit an object count limit which has disabled me from using the debug exe launcher unfortunately.

Marth880: If you could actually put together the sound lvl for me that would be absolutely amazing. It took me forever to get custom sounds working and when I finally did, the volume somehow was reduced drastically in the process. I increased the decibel level in Audition past the point where it just turned into mumbled garbage and yet the sound still remained quiet after munging.

I unfortunately don't have any updates at this time as I have been extremely busy at work ( and will continue to be for another month or so) and with life in general.

I found this video of someone who added the Extended Clone Wars Mod and played the 1.5 version of this map.

I searched for the mod and found that Deviss added the source files/assets for us to use ( what a nice guy!)
viewtopic.php?f=64&t=24475

I would love to use some of the troopers seen in the first video such as the updated chain gun soldier however I'm having some trouble finding the correct source files.
Does anyone recognize those troopers?

I added the Extended Clone Wars Mod to my game however the skins and troopers were not the same so I'm wondering if the mod in the video was modded.

Any help would be much appreciated

Double posting is against the RULES; please EDIT your post instead -Staff
Last edited by GarfSnacks on Fri Jul 27, 2018 7:07 am, edited 1 time in total.
Top

Wow, I remember viewing the newest Utapau Attack file back in 2012 and now I am glad to see you joined the modding community again after 10 long years. I hope all has been going well for you and can not wait to see this get released!
Top

I'm glad to be a part of it again. It's certainly been awhile since that release and I've learned a thing or two about art and design since then so this should be a nice improvement...hopefully XD
Top

I found this video of someone who added the Extended Clone Wars Mod and played the 1.5 version of this map.

I searched for the mod and found that Deviss added the source files/assets for us to use ( what a nice guy!)
http://www.gametoast.com/viewtopic.php?f=64&t=24475

I would love to use some of the troopers seen in the first video such as the updated chain gun soldier however I'm having some trouble finding the correct source files.
Does anyone recognize those troopers?

Do you happen to have Utapau Attack 1.7 by any chance just for the sake of archiving? I would say this to anyone else.
Top

RedHardcore - Hey Red, unfortunately 1.7 is no longer with me but it was also never released so I don't think it will be missed

I'm sorry for such the long absence, I am still in crunch mode at work, but I do have a small update!
I have a small preview of what the mini map is going to look like which should in turn also give y'all an idea of the base layout of the map.
This is still a WIP so the design of the UI elements may change.
I added red markings for downed ATTEs and one LAATi ship. Thinking about it now, I may remove them from the minimap because they have no significance to gameplay or objectives so it might be confusing.
I tried to follow a similar style to google maps so that the readability is fairly easy. White represents the main roads whereas the light blue/grey represent the secondary areas primarily for soldiers but not limited to that unit type. 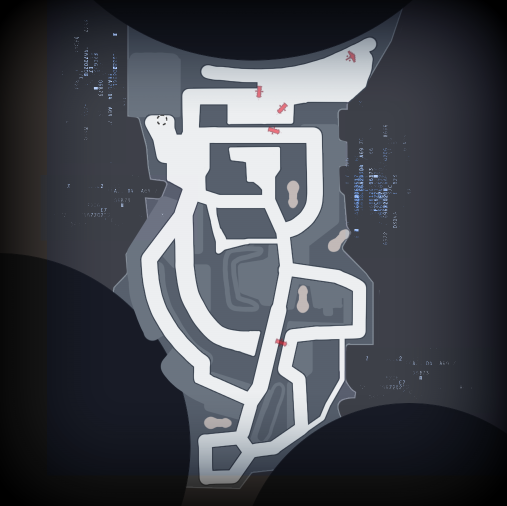 Wow! I’m just blown away by the beauty of the map. With devs sides I think it will be one awesome map. I am really looking forward to playing this. I have a few questions though.
Roughly how big is the map?

Are there any new units that are different from devs sides?

I saw one new vehicle I think if I’m correct are there any more?

Finally how close is it to completion?

Hey everyone! I'm sorry for being in the dark for so long. I've managed to get some time back to myself and can work a bit more on the map. I've made small updates to some of the custom environment assets I created so now they no longer have wonky collision.

I was thinking that it would be beneficial for me to release a beta at this point and get some feedback from y'all on how it plays.
Some things to note:
In order to play this map through the dev shortcut which creates the BFront2.txt file I had to delete a large chunk of assets from the map due to it crashing the dev shortcut, although it didn't crash when running through Steam?
Also, I've removed all of the fancy aesthetic lighting and a large portion of the fx in the map. These were removed as I was attempting to solve some lighting issues ( light flickering and showing incorrectly on terrain) so it's not going to look nearly as pretty as in the screenshots, sorry. A majority of the Rep units at the moment have the same weapons load out but the teams are still fairly balanced.


If you'd like to be a part of the beta, send me a direct message and I'll link you the map file.
I would love to hear your feedback, comments on what you liked, what you hated, what you think could be added, everything! And I will see what I can do to make it happen

EDIT: I do apologize, the total file size is around 580mb (200mb zipped) I have a lot of cleanup work to do which I am absolutely looking forward to :p


@Cyberctf346 - Thank you very much!
I'm not quite sure but I would say the map is probably too big XD
My first post lists out all the vehicles currently in the map
Completion date is hard to determine as I've had less and less time to work on it

Hopefully before the summer of 2019, but I can't say for sure.
Top

I love how you improved the lighting!
Top

Thank you GAB and Delta-1035! Yes, I've always been bummed at how little the lazers actually affected the surrounding environment considering they emit so much light. Plus it just makes the static environment feel more dynamic, alive, and really brings everything cohesively together. The environment lighting (lamp posts, building lighting) is also very useful to help define the various smaller playable spaces that surround the CPs.

I've been slowly adding in various units from Deviss' kit.
The Engineer still needs his custom skin added and I also need to make sure all the various orange hues match up since right now some are light orange, dark orange, etc
I would like to use the Kashyyk trooper clone as the sniper class, does anyone know if there exists a custom white armor texture?
I've also been customizing the weapons as well (projectile velocity, spread, shot delay, clip amount) to try and keep all weapons, CIS included, balanced.
The DC15A and a higher velocity round variation will be more of the support weapon while the smaller DC15s will be the closer combat assault rifle with
Finally got the rotary cannon in and gave it to the engineer since...I really didn't know who else to give it too. I may re-add the default clone commander back in or switch him with the Engineer.


Just realized I don't have the heavy trooper clone, I may add him back into this list. 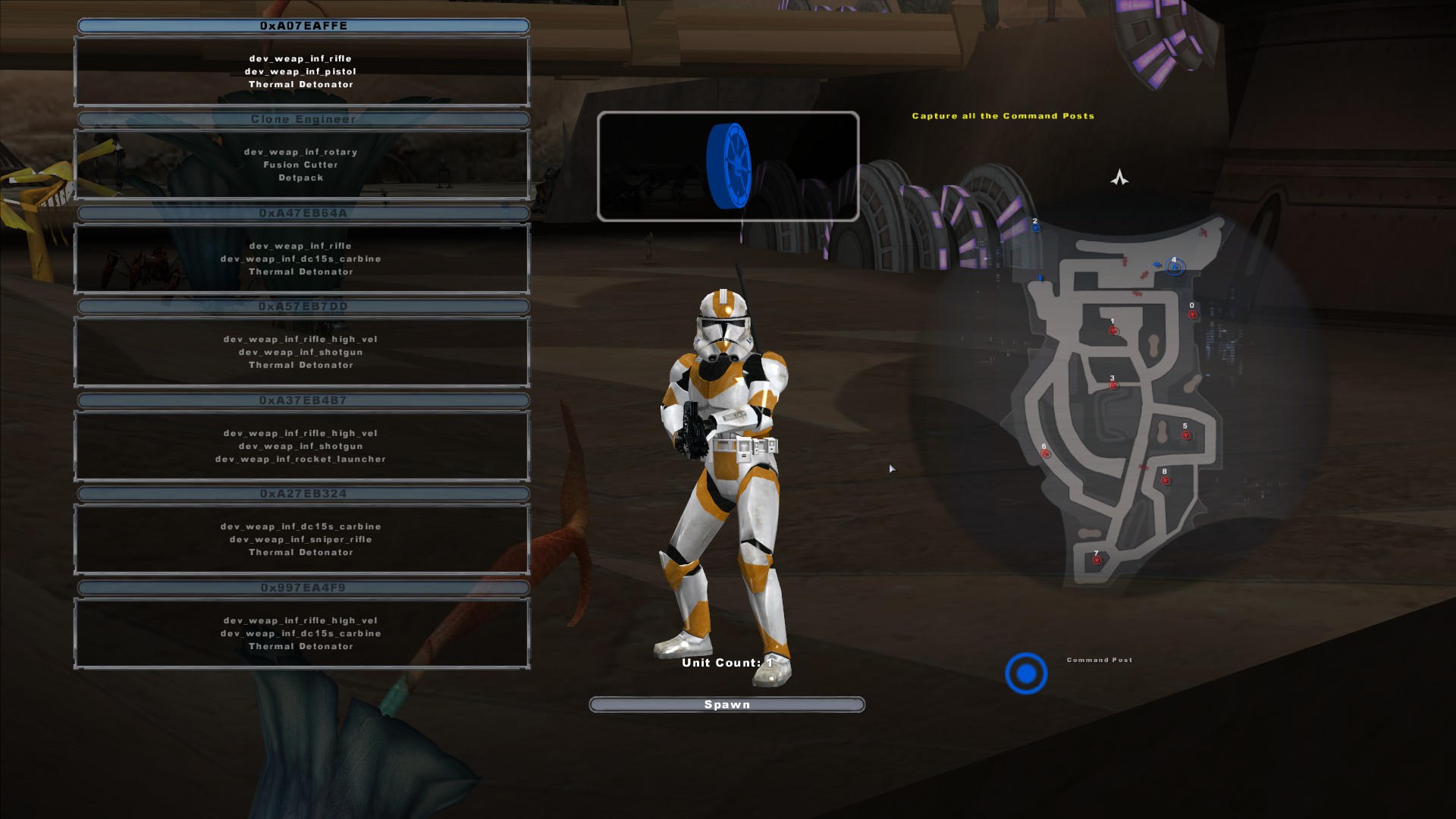 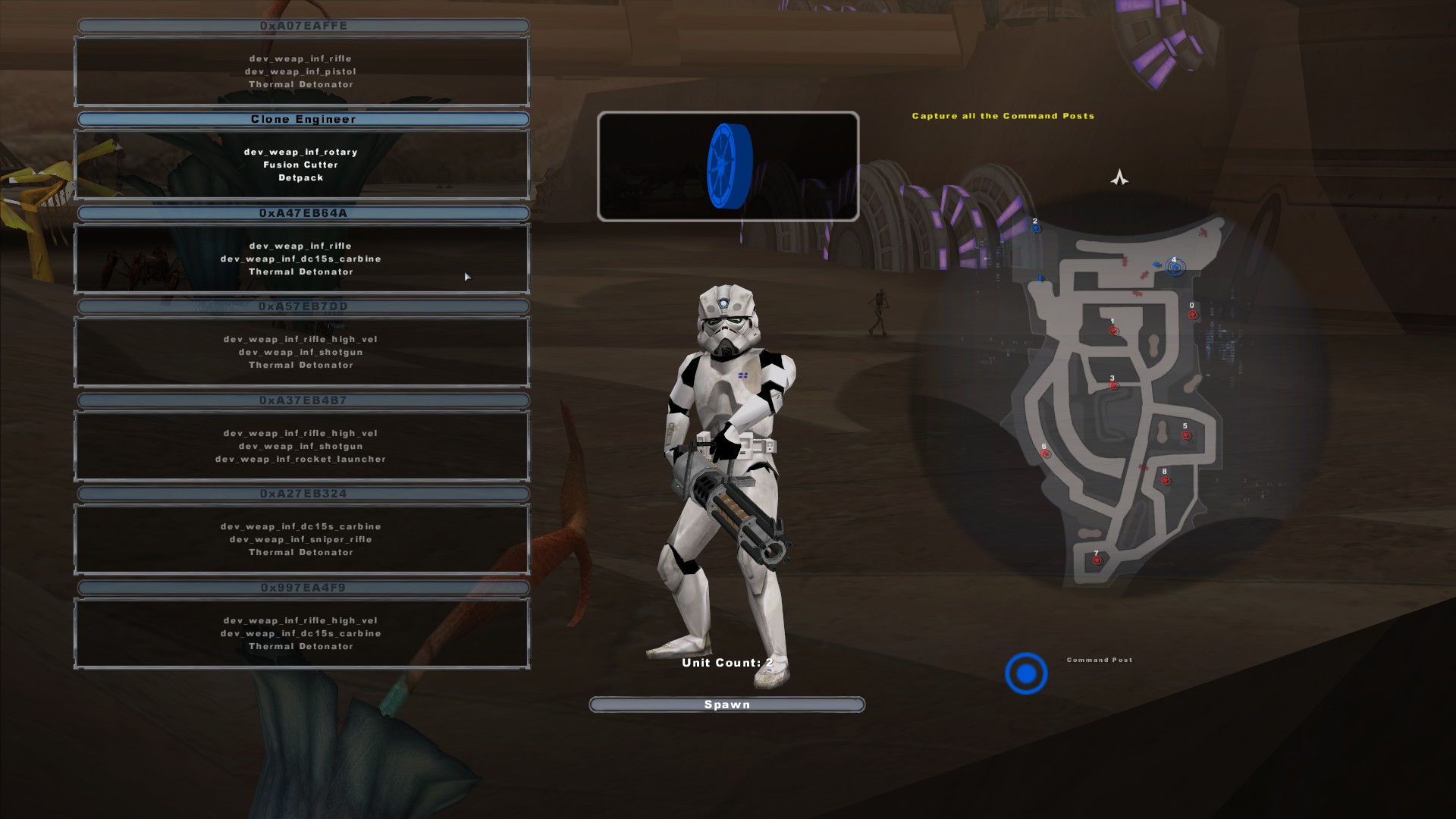 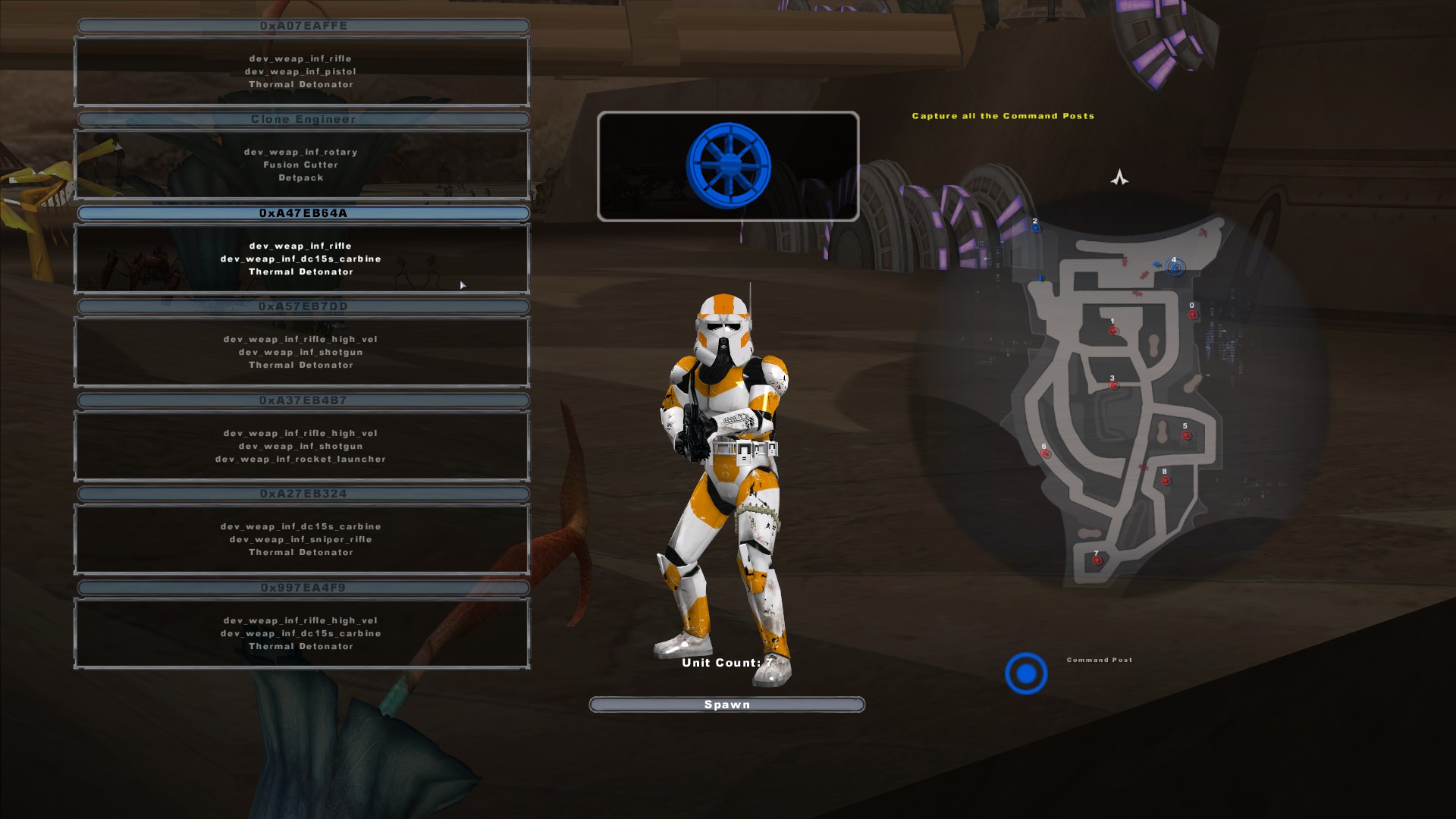 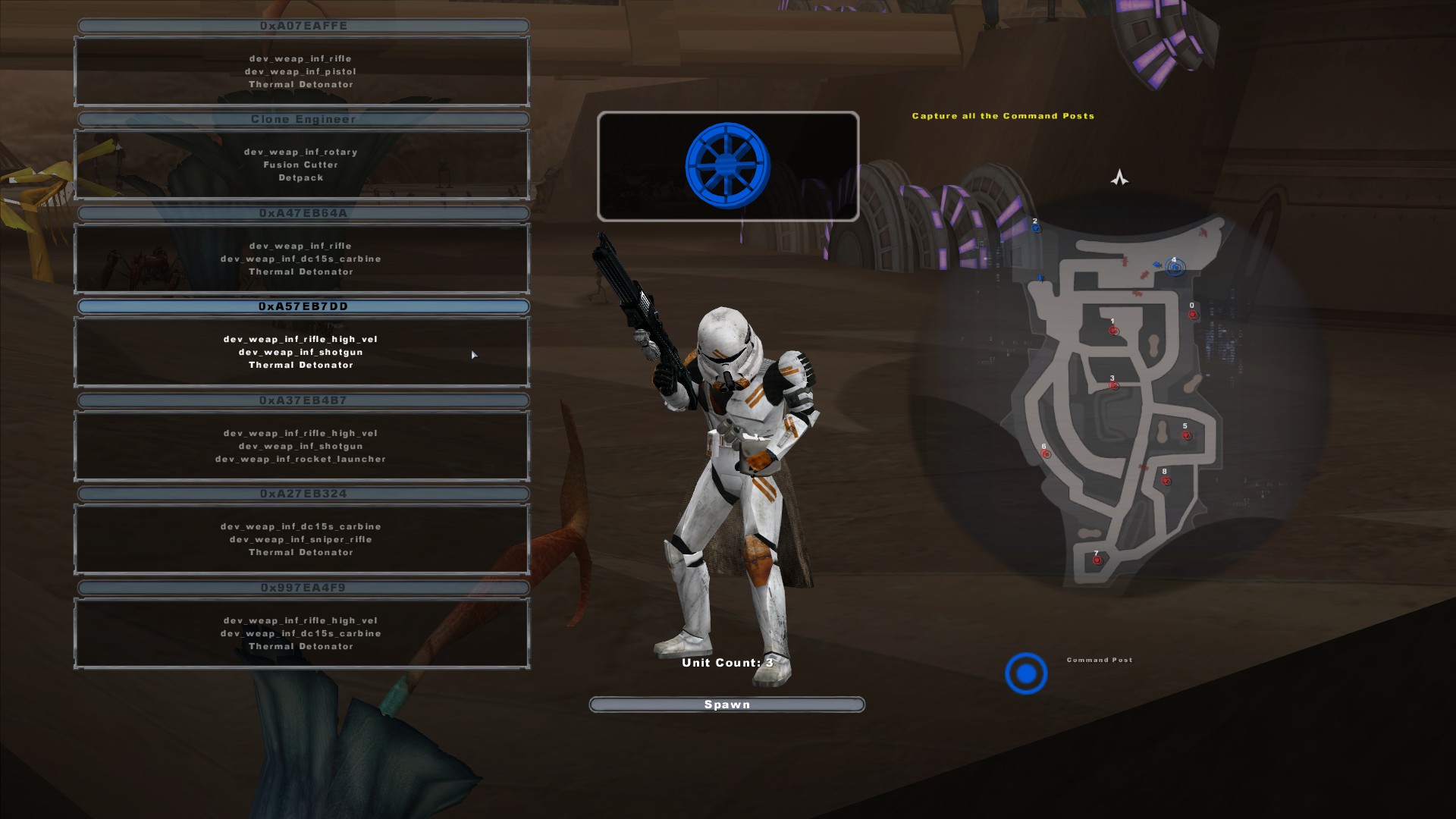 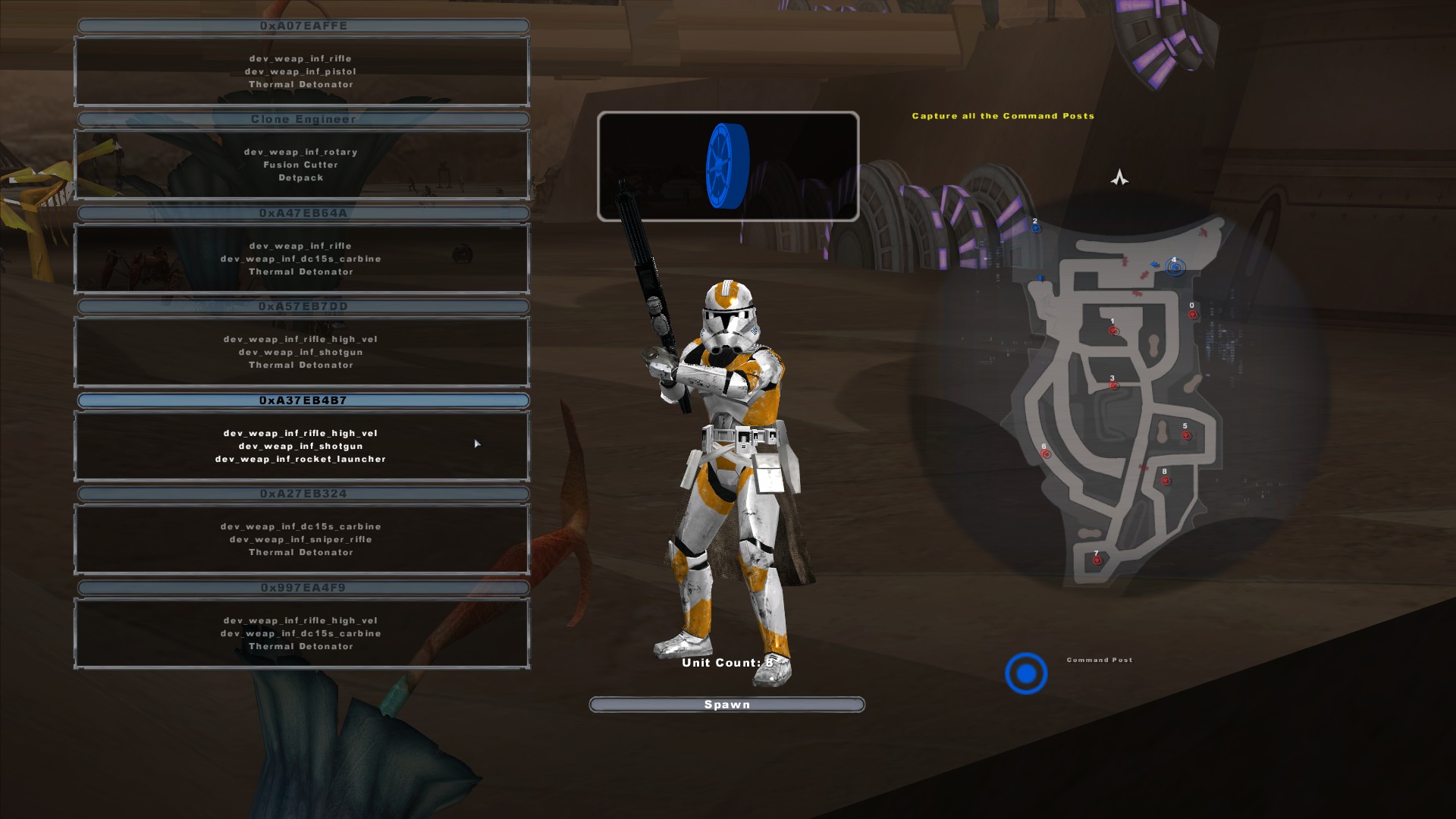 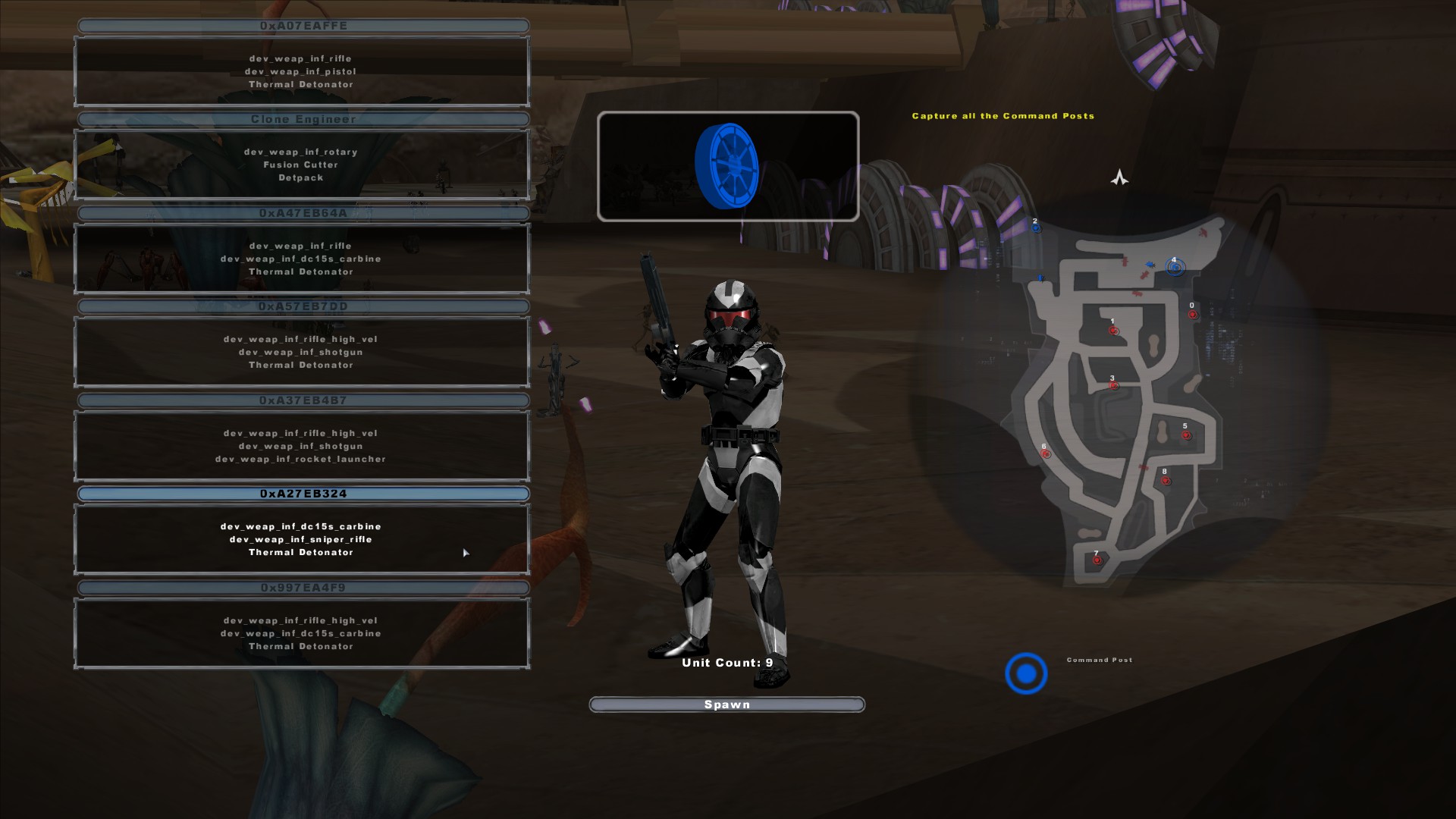 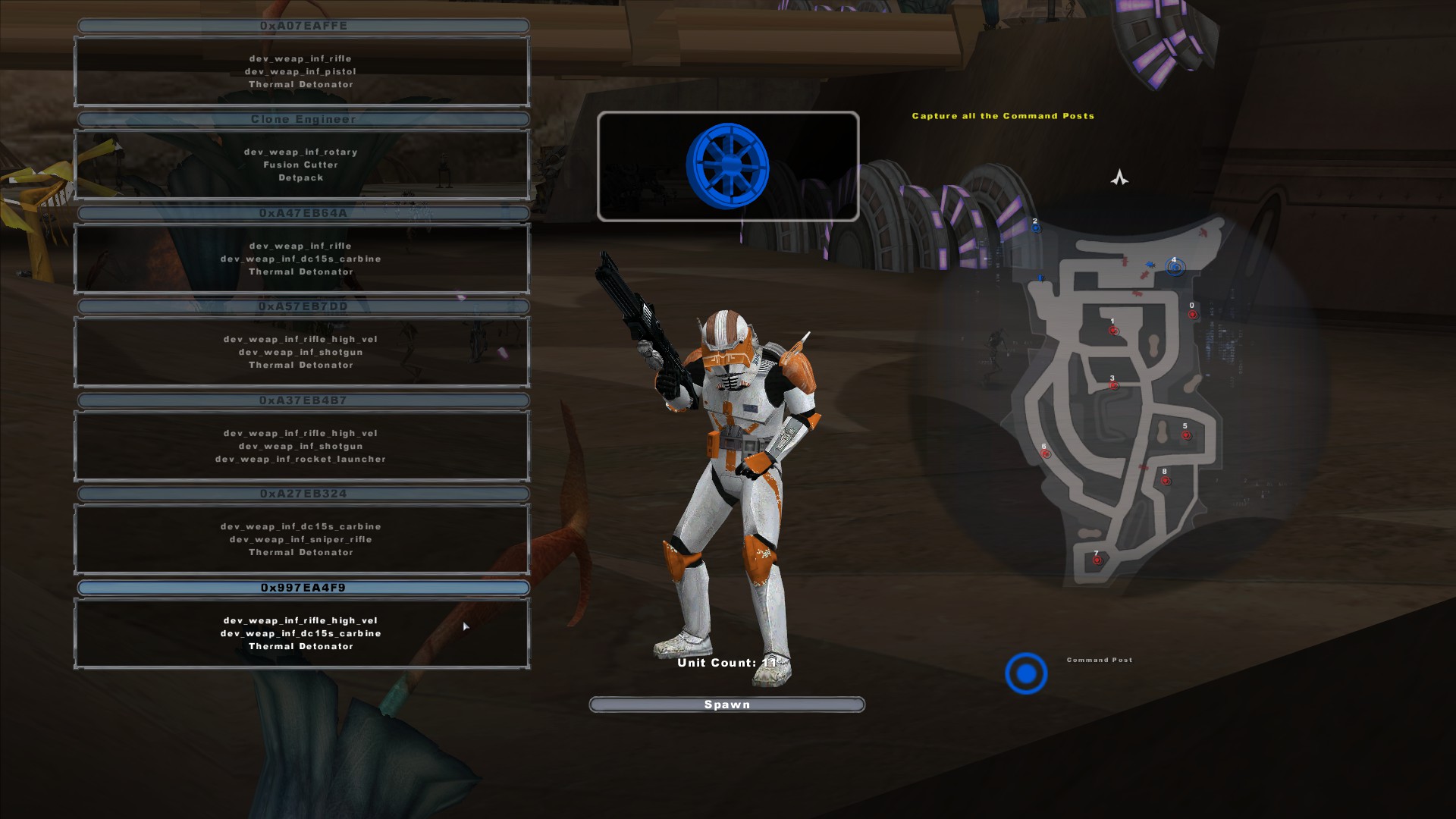 The arrangement for who gets what weapon isn't final. Also, if you have any suggestions as to who should get what, let me know

And happy new year to everyone!!
Top

Wish I could’ve gotten here sooner to play the beta...
But the map is looking very good! I can’t wait to play this when it comes out!
Top

Thought I should share some pictures so people don't think it will never get finished. I've been continuously tweaking the units weapons and adding props while also making some map layout changes in order to increase balance while also making sure the entire map is aesthetically pleasing and not leaving areas looking unfinished.

I've added the dust clouds and explosion particle effects back into the map, though the visibilty at times I feel is reduced too much so I may do some more tweaking with that. I also added a world height fog which is visible only in the lower section (blue tinted atmosphere) of the map to push the sense of depth and variety wtihin the map. This fog is also abit too intense in color so I'll be tweaking that as well. 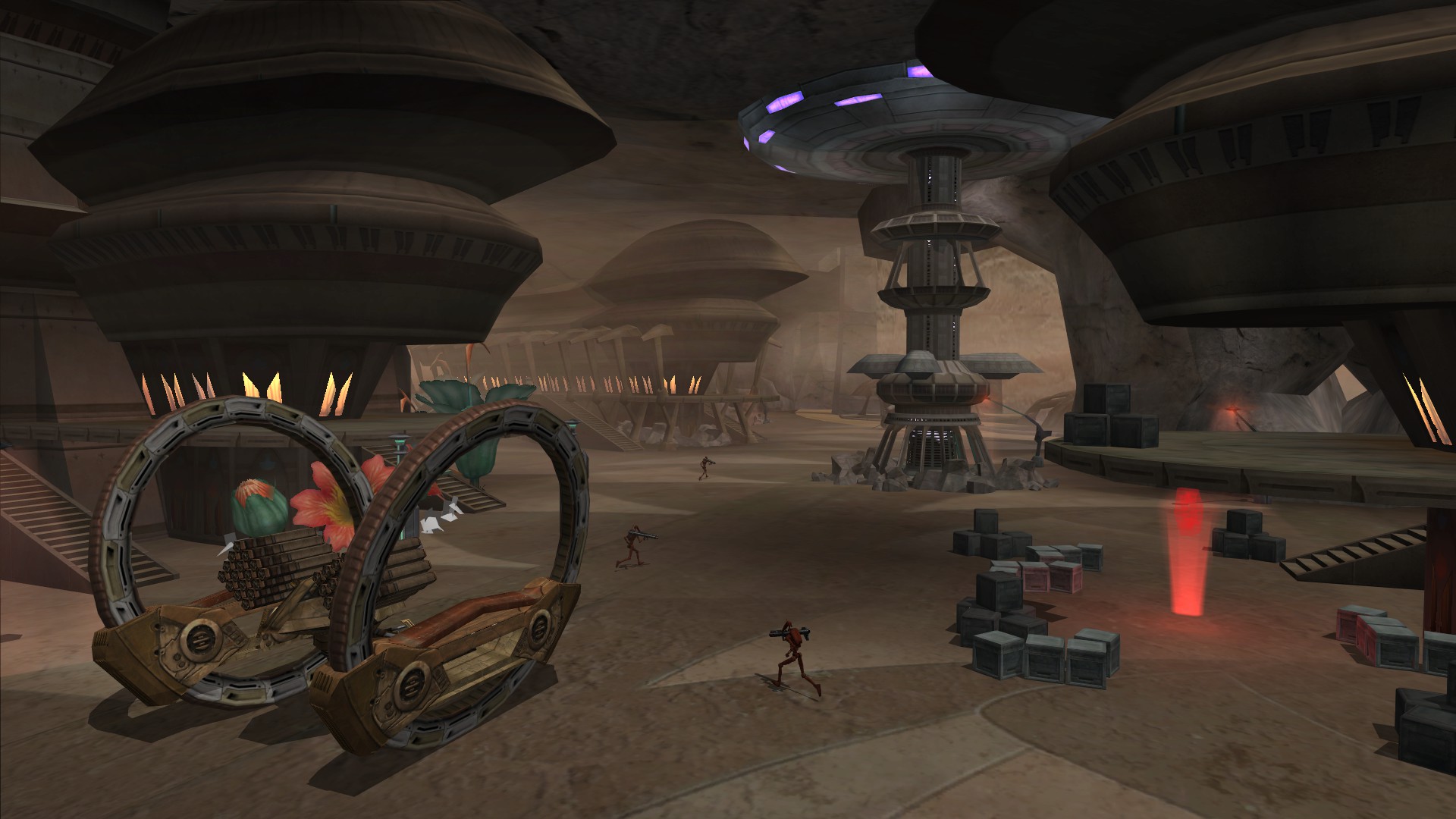 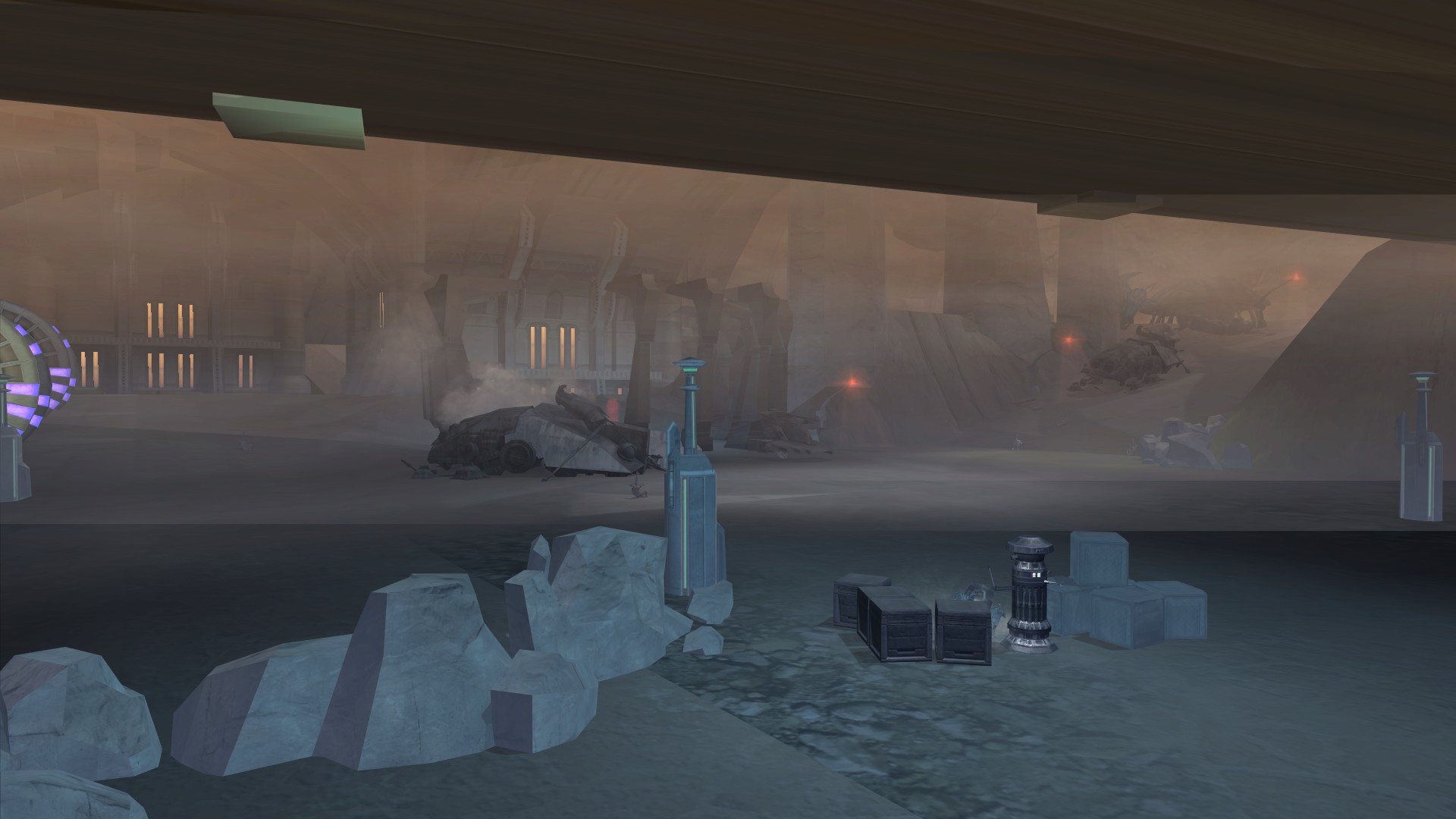 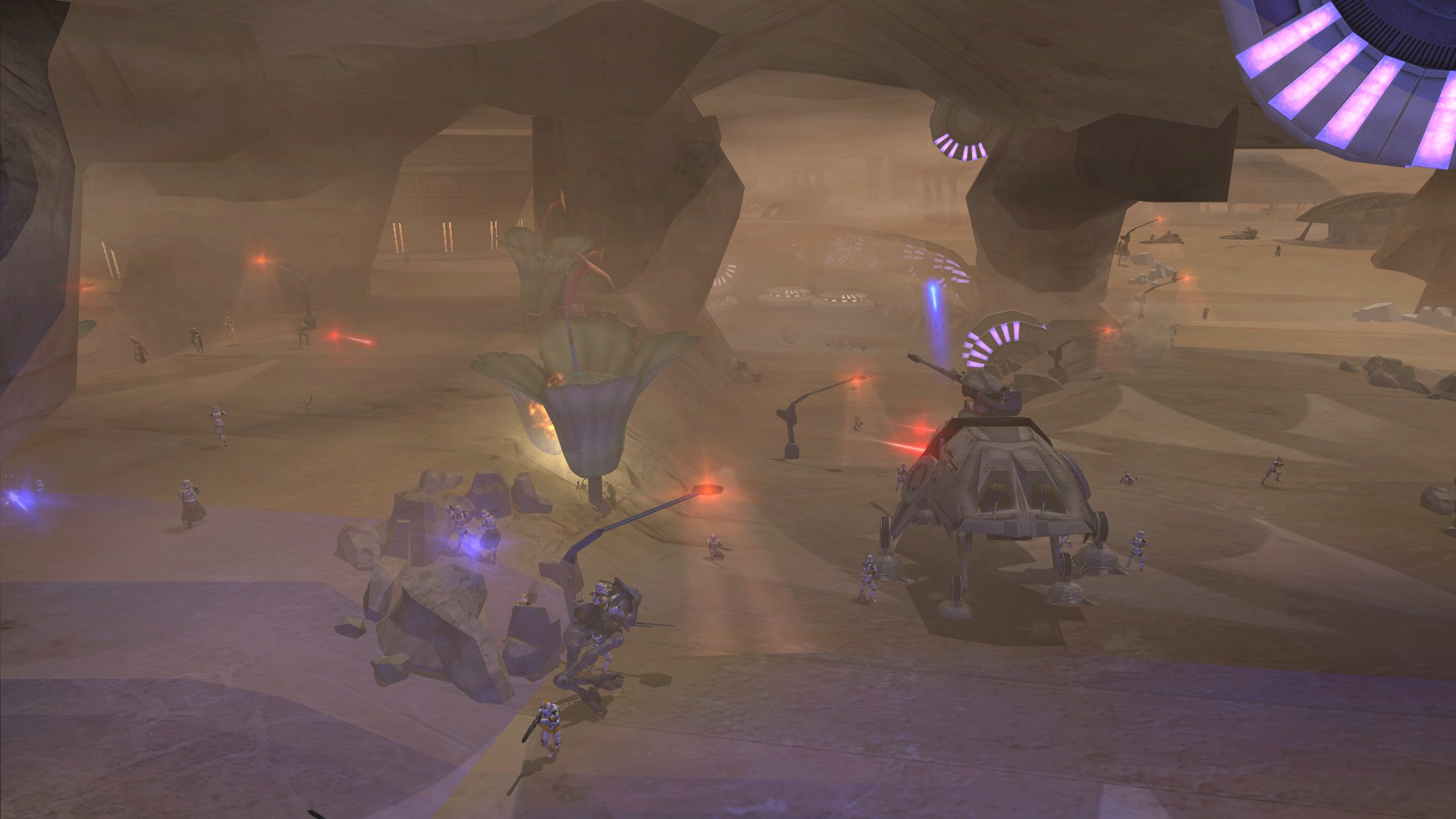 Most of the hand placed lighting, seen in previous images posted, has been removed due to light baking issues. One of the last steps in my process will be to add it all back in, so don't worry about the blandness seen here